Christmas isn’t my thing. Neither is winter. I know how to escape the former pretty well, but I’m writing right now as the latter punishes New England with a snow storm that includes high winds and sub-zero temperatures. No wonder I didn’t want to come home from the south of Portugal! 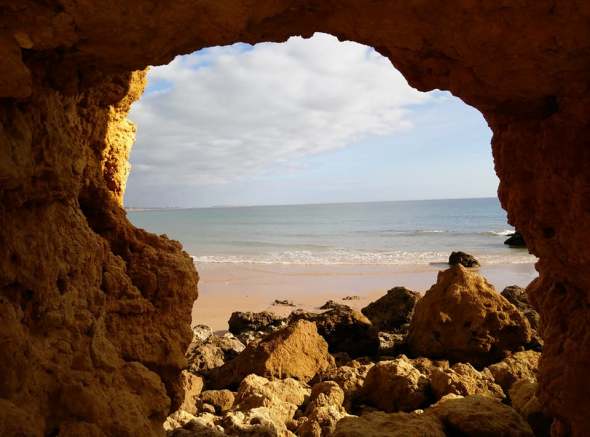 I stayed in Albufeira, central to the coast of Portugal, which is also known as the Algarve. Albufeira was an excellent choice for what I was there for: walking and hiking. Miles and miles of beaches were within minutes of my apartment/hotel, with hiking trails over and through grottoes, sea caves, and sea arches. December was a really nice time to go, too. The weather was in the 60s, warmer when the sun started blazing, and the area was low key and relaxing.

I’ve been a lot of places. Some favorites are New Zealand, Southern Utah, and South Africa. The Algarve definitely made the top ten list, maybe even the top five! It was like Southern Utah with an ocean! That’s the way I described it to one of my hiking friends.

The number one place I wanted to see, and the number one tourist attraction in the area, was Ponta da Piedade, in Lagos, further west by 25 miles.The local bus service was very good, and I spent the day in Lagos. Ponta da Piedade was a walk of about an hour from the bus station, and a rather strange one at that. I really didn’t think such splendor would be at the end of such an odd walk through residential areas of varying financial classes, but I was pleasantly surprised! Not for the heights haters, taking a tumble off of one of these grottoes spells certain death! From up high, the Atlantic Ocean probably doesn’t get much prettier. Boat rides are also available for a totally different perspective.

Any questions about why I didn’t want to come home?