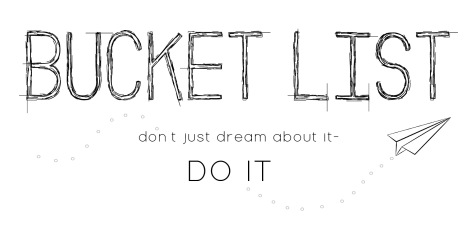 I highly recommend having a Bucket List and sticking to it. My Bucket List started when I was a kid flipping through old encyclopedias, searching for any map that I could find. I would pull out lined paper and make extensive lists of places with names that caught my fancy. Meanwhile, I was also filling notebooks with fictional stories, dreaming of being a professional writer.

When I got a little older I was further influenced by the  adventures of others. But growing up one of six children in a family with a lot more love than money, little old me couldn’t dream big enough to think that I would ever be able to visit these magical places on my own, or, really, that I would ever get my writing published.

Well, times, as they say, have changed!

Not only have I made my dreams of being a published writer come true, but I’ve also visited forty-plus foreign countries, all fifty U.S. states, six Canadian provinces, and forty-plus U.S. National Parks. (As another Bucket List goal I’m trying to hike all 59, and have about half of them done.)  Am I rich? Hardly. Trust fund baby? Nope. Heiress? Nada. Just motivated. Oh, and I don’t spend money on stupid things.  That’s a biggie.

So, let me get to Romania and Bulgaria.

In high school I had a teacher that traveled to Transylvania, and brought in slides of his trip. My recollection are scant. All I know is that he showed us Bran Castle (a.k.a. “Dracula’s Castle”) and I never forgot it. He lived my dream. I had to go.

Fast forward to 2018, and I’m living my own dream. I highly recommend it. It’s a lot better than living vicariously.

My friend Holly and I consulted our Bucket Lists and realized Romania was on both of them. We’re teachers in the same school and have the same vacations, so we picked April and started planning. I handled the flights and hotel in Bucharest, Holly started emailing local guides after we brainstormed ideas as to where we wanted to go. As mentioned in a previous blog, she found a guide through Tours by Locals. Click here if you’re interested:

Just another disclaimer: I don’t work for this company and am not endorsing it for any friends. But we had a wonderful guide named Alex who drove us all over Romania for three days, and Bulgaria for one. The benefit of having a personal guide and driver was that we could ask him to pull over along the way to see things that perhaps not everyone would want to see, and to stop for ice cream bars twice a day! Yes, we ate a heck of a lot of frozen delights in Romania!

Romania has a lot to offer: rolling countryside, snow-capped Carpathians, historic monasteries, even a brown bear sanctuary in Zarnesti. But the biggest tourist attraction by far is Bran Castle. I thought it was interesting that the locals didn’t speak highly of Bram Stoker. According to what we were told he “got history wrong” and “made a lot of things up.” Understood! But the truth is, Bram Stoker also helped to bring interest to Romania. We didn’t see crowds at any attractions until we got to Bran Castle. It was full of tour groups and school children. As a teacher I have to say that going on a field trip to Dracula’s Castle would be pretty darn cool! 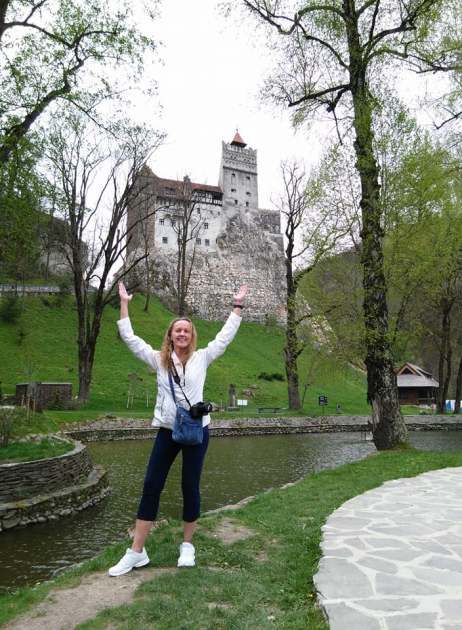 And there it is! It took me over thirty years to get there, but who’s counting?

Bulgaria was unexpectedly fantastic, and may have even been my favorite day of all. I love surprises, don’t you? Cave monasteries are a big attraction in northern Bulgaria, and it’s completely possible to take in a few on a day trip from Bucharest. Veliko Tarnovo (Hill of the Tsars), the former historical capital of the Second Bulgarian Empire, was most memorable for me. The medieval fort was incredible, and offered inspiring views of the surrounding city.

We spent our last day in Romania in Bucharest. Finding a hotel room with two beds was pretty tricky, by the way, but I did it. Alex picked us up in the capital every day. Rides were long, and most days lasted at least twelve hours. Exhausting, indeed!

But a very memorable and beautiful trip.

When I travel with friends I don’t have much time for writing, so usually leave my laptop at home. But my budding career as a writer of women’s fiction is never far from my mind…or my heart!

Sigh. Next up is another hiking extravaganza in the Southwest, followed by my first trip to Australia, my sixth continent. Hurry, July!