As a women’s fiction writer I live many different lives in my crazy little mind: a rock and roll groupie working the back stages of the 80s hair metal scene, a budding female rock star, a young woman who marries a man with six children, a school guidance counselor moonlighting as a choreographer for a group of male exotic dancers. Pretty exciting stuff to be juggling all those different personalities! My real life isn’t so different. I’m a full time teacher, a part time writer, and an avid hiker. Anyone who knows me well knows that one of my goals is to hike all 59 National Parks in the United States. I’ve previously blogged about some of my adventures, and most, if not all of my posts, have been about parks in the American West, my spirit home. The south also has a handful of parks, a few of which I’ve already done.

People always ask me what my criterion is for considering a park “hiked.” My basic thought is that I have to be on the trails of a large park for at least three days for me to put it on the “hiked” list. Smaller parks can be put on the list after two days. But I’ve spent many more days than that in some parks (hello, Yosemite!), have been to other parks numerous times (I think Death Valley is my record…been there EIGHT TIMES!) and some are so small or maybe aren’t really hiking-friendly that I’ve done less. Not taking anything away from those parks! Each one is interesting and special in some way. But some, of course, are better than others, and we all have our favorites. While I, as already mentioned, can’t get enough of Southern Utah in particular, I know many people who thrive in Maine’s Acadia (been there three times, hiked it. That’s another blog!) And some love the southern parks, especially those that the Appalachian Trail runs through. Virginia’s Shenandoah is one of those parks.

If you’re one of those hikers that has to do the hardest trek in the place, the hike I did to take this shot probably isn’t the one for you. This was the Mary’s Rock hike, which is on the AT, and is about a 7.5 mile round trip. A great workout for sure, but I’m told the real challenge is Old Rag. Me, I just want great views. If I have to work to get them, not an issue. But it isn’t my objective. I also like historical hikes. The short Fox Hollow Loop includes a cemetery and other remains of a family that lived in the area. Shenandoah offers a wide variety of hikes, including waterfalls, which I hoped to see, but my car broke down on the third day I was scheduled to hike! Sigh. Couldn’t take Shenandoah off the list because I didn’t get enough. I want at least one more day there. Here’s a link for suggested hikes in Shenandoah:

Everglades National Park in southern Florida is one of those parks that isn’t necessarily made for hiking, as can probably be imagined. Nevertheless, after visiting it in 2002 I thought I should have another look at it. There are trails there, some of them quite long, but good luck finding a day where you won’t be destroyed by bugs within ten minutes of entering the forest. I visited in late November and had every intention of hiking the fifteen mile (round trip) Coastal Prairie Trail to Clubhouse Beach. The rangers were quite entertained by my gung-ho attitude. I soon found out why: I was severely attacked, and was also slowed by the very slippery mud from a recent rainstorm. Which gave the bugs more chance to devour me! Some nice locals told me the best time to hike is when it hasn’t rained for at least a week and things have a chance to dry out. I had to settle for shorter hikes. My favorite was Eco Pond, south of Flamingo:

The park map doesn’t necessarily show trails here, but one goes pretty much all around the lake, and you can fudge the rest without getting wet. More on Everglades can be found here:

One of our newest (and smallest) National Parks is Congaree in South Carolina. Not too many people even know that Congaree exists, which is probably why it’s free to get in, and the rangers thank you profusely for visiting. Congaree was set aside by the Obama Administration because the area is the “largest old-growth bottomland hardwood forest” still in existence. 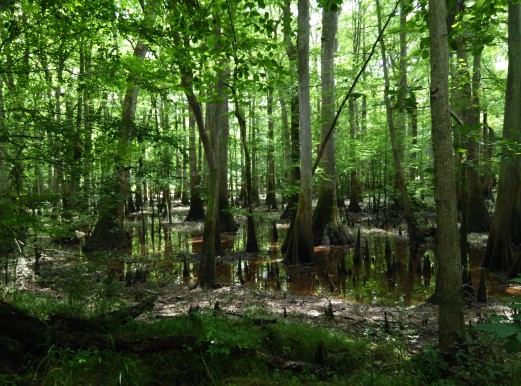 I was here at the beginning of summer with the plan to return the next day for more, but decided that one full day of hiking was sufficient. Like the Everglades, visiting Congaree is a sticky, buggy affair. This picture is from the Oak Ridge Trail, a seven mile loop which also includes several other smaller trails. Expect flat trails, some boardwalks, and plenty of mud. More information on Congaree can be found here:

Well, those were some nice memories. Now, back to the books!