I’m not here to write about the minute details of the attack. What I am here to say is that less than three months later, I visited Sri Lanka, and it’s a perfectly safe place to go. All the pluses mentioned above, and more, hold true. Furthermore, Sri Lankans are not in denial about what happened. They know they have to dig the country out of a hole. They wanted to talk about it. It was refreshing.

If you have plans already, don’t cancel them.  If you’ve always wanted to go, I say: go. My travel companion and I went with One and Only Travels and had our own guide/driver, and four and five star hotels. I’m not getting paid to endorse this company and do so only based on the experiences we had. They offer packages that are flexible and can be changed based on your priorities. Leaving group travel behind was a real plus. And the price we paid was almost embarrassing. We spent two weeks in the country for under $3,000, including airfare, which I booked through cheapoair.

Here are four things to do that shouldn’t be missed.

All the other great stuff aside, my first attraction to Sri Lanka was the Buddhist sites. I remember pouring over books about the philosophy long ago and reading that Sri Lanka was one of the best places in the world to explore Buddhism. Back then, I never thought I’d be lucky enough to get there, especially since it wasn’t considered a safe country due to a 25-year civil war that lasted from 1983 to 2009. But lo and behold, I made it! The grand daddy is to visit the Temple of the Sacred Tooth Relic (Sri Dalada Maligawa) in Kandy, which holds a tooth which is said to belong to none other than Sidhartha Gautama, also known as Buddha. Don’t expect to see the actual tooth unless you stand in an extremely long and slow moving line, but you can certainly easily take in the ritual of the opening of the golden doors that hide it and watching devout Buddhists as they worship the sight of the tooth.

My personal favorites were Dambulla Cave Temple located in the town of the same name and offering five ancient caves filled with Buddhist images and statues, some as old as 2,000 years, and nearby Sigiriya Rock Fortress, which was not only a monastery for many centuries, but was once the residence of a very creative king. 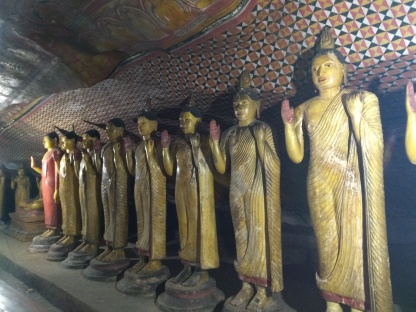 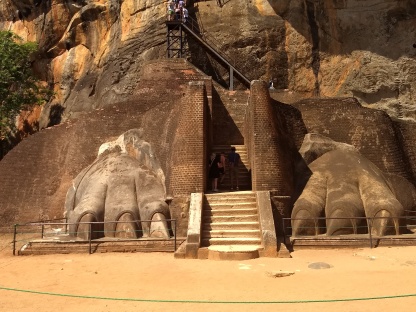 The entrance to the Sigiriya, or Lion Rock, was once in the shape of a giant lion. Today, only the paws and claws remain, but it is a fun, unique, and interesting climb that includes viewing some well-preserved frescoes of scantily clad women that may be a sampling of the king’s many concubines. Ruins of the king’s fortress remain at the top, and the view is pretty great, too!

Since I was always so interested in the Buddhist aspects of Sri Lanka, I never really considered it to be a great place to see wildlife. Good thing my travel companion enlightened me. Naturally, the best place to view animals is at national parks, but don’t be surprised if you see some amazing creature lumbering down the side of the road:

This gorgeous lady was happy to be photographed and videotaped for a few minutes, but chased our vehicle when she’d had enough! Ahh, what a memory!

Want to really see some elephants? We viewed almost two hundred of them in Kaudulla National Park. We also went to Sri Lanka’s most famous park,  the extremely remote Yala, where we were blessed with spotting a leopard coming to a watering hole for a drink. 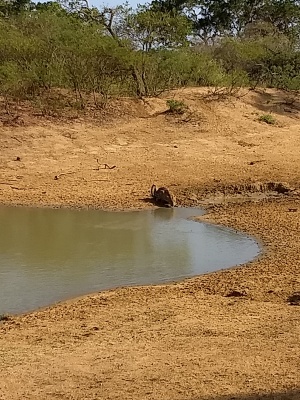 Extra added bonus at Yala: viewing the raging Indian Ocean. Our tour included two other national parks, but we paid what turned out to be very small additional fees for our guide to set us up to go to Kaudulla and Yala instead. Worth it! These safaris were private, like the rest of our trip. Top that.

We also visited an elephant rescue as well as a turtle hatchery, which I’ll talk more about below.

As an island nation, Sri Lanka has beaches on all sides. We hit the coast as our last stop, south of Colombo, in the Beruwala area. Beruwala is lined with private resorts. It’s also home to turtle hatcheries, which buy eggs from locals who intend to eat them. Instead, the hatcheries bury the eggs and raise the turtles for three years before setting them out into the Indian Ocean. 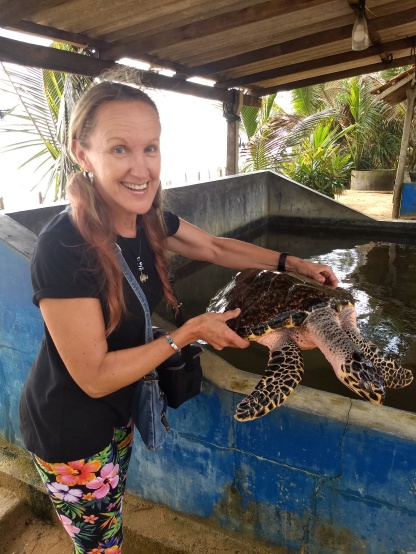 Side note: I didn’t ask to hold this big, flopping boy. The owner just plunked him in my hands and started taking pictures!  I was afraid of dropping him, and he gave me a scratch or two, not unlike a cat, before I lowered him into the safety of his tank.

Beruwala Beach and the roaring India Ocean lie beyond the boundaries of the resorts, which are protected by security guards. Once you leave the confines of your hotel, you are fair game to any and all souvenir merchants. But the further I got down the beach, the less humanity I saw. Even in a heavy tourist area like Beruwala, it is possible to find a slice of privacy. I also found a monitor stalking around! As the self-proclaimed Lizard Whisperer, I was able to get some pretty good shots of him. Not recommended for everyone.

The beach was our last stop before heading home, but as a hiker and a lover of solitude, the mountains of Sri Lanka were the best of the best. To be more specific, the area of Ella was without match on our adventure. This was the place I didn’t want to leave.

Back to Lonely Planet one more time. The famed train from Demodara passes through terraced tea plantations en route to Ella. Lonely Planet rated it as one of the top experiences to have in the entire country. This stumps me, because my friend and I thought it was way over-hyped. The windows were dirty, it was uncomfortable and hot, and children were running up and down the aisles the whole time. If that’s your idea of fun, well, you’re going to love it. We thought being in the car and driving through the plantations was much more wonderful. Oh, and Ramboda Falls, with trumpet flowers in bloom, was simply one of the most jaw-dropping scenes I’ve ever been lucky enough to take in.

Ella is a Westernized town with more than enough restaurants and shops to please the most homesick American. We drove right through and ended up in a remote enclave called 98 Acres with a view of Little Adam’s Peak, which we climbed the next day. We loved this area so much, we talked about going back to Sri Lanka just to spend more time there!

I’ve just scratched the surface of the wonders of Sri Lanka. Easily one of my favorite countries, with something for everyone. A visitor can get a pretty good overview of the island in a couple of weeks.

Are your bags packed?

4 thoughts on “Four Things You Must Do in Sri Lanka”